When I was diagnosed with Celiac disease, I had no idea what I was getting into. Was I allergic to gluten? Reactive? What did it mean?

If you’re new to Celiac, here are some quick facts on the autoimmune disorder.

It’s not an allergy

People with Celiac disease don’t have an allergy—they aren’t allergic to gluten (but there is such a thing as a gluten allergy). Celiac disease is an autoimmune disorder that damages the villi of your small intestine and interferes with nutrient absorption.

It’s more common than you think

About 1% of the population—or 1 in 133 people—has Celiac disease. It can affect men and women of all ages. Even more, about 83% of people are undiagnosed or misdiagnosed.

It can take up to 10 years to get diagnosed

It takes approximately 6–10 years to get properly diagnosed with Celiac disease. I was diagnosed after about eight years of searching for the reason behind my health issues, and I hear many similar numbers.

Stomach issues are the first thing people think of when someone mentions Celiac disease. The truth is, some people with Celiac don’t have stomach symptoms—or any symptoms at all. It’s more common than people realize to have Celiac disease and be constantly damaging your intestines, without even realizing.

I love this infographic from Gluten Dude explaining the most common symptoms people with Celiac disease experience after ingesting gluten.

You need more than a blood test to get diagnosed

And the blood test can give inaccurate results, especially if you decided to go gluten free before getting tested. My first blood test was negative for Celiac. I was surprised, but I had cut gluten from my diet a few months before in a desperate attempt to feel better.

To get an accurate diagnosis, I had to undergo the “gluten challenge.” This was six weeks of hell where I ate gluten again before having another blood test—that came back positive. After that, you’ll need a biopsy from your intestines to verify the diagnosis.

There isn’t a cure

There are no pharmaceuticals on the market that can cure Celiac disease. Currently, the only treatment is a gluten free diet. Even with strict adherence to a gluten free diet, some people don’t feel completely healthy. It can take years to repair the damage gluten causes your intestines. 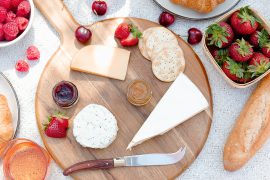 5 Tips to Avoid Being Glutened When Eating Out